Health officials are urging parents to look out for signs their children are vaping — amid a teen e-cigarette epidemic.

Because vape devices are flavorless or innocuous smelling, they are harder to detect than traditional cigarettes. The Food and Drug Administration (FDA) is urging parents to look out for behavioral changes and physical symptoms instead.

In a series of videos shared on YouTube and Twitter, the agency says dry coughs, a dip in school grades and memory loss can all be signs of nicotine addiction.

FDA doctors also say parents should be alert to devices that look like USB sticks or other electronic devices, and stay up to date with the latest brand names like Juul and Puff Bar.

The Centers for Disease Control and Prevention (CDC) revealed earlier this year that more than 2.6million US teens use vapes, the equivalent of one in five. 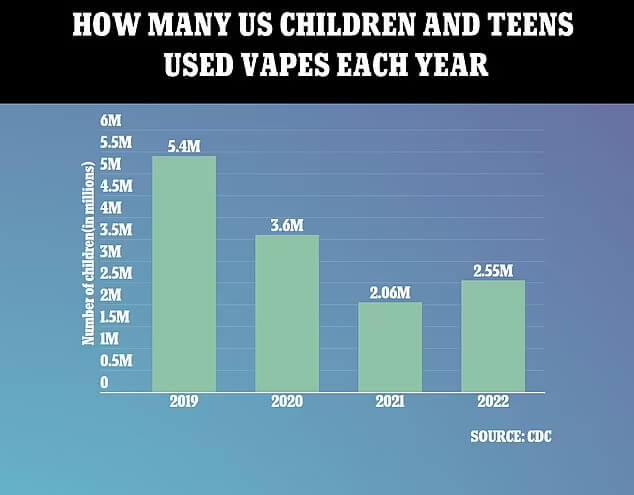 While they were initially thought of as a safe cessation tool for smokers, studies increasingly show e-cigarettes can cause severe lung and heart damage on par with traditional tobacco products.

The three FDA videos were originally uploaded a year ago but were reposted on its social media channels this week.

In the first video, Dr Deepa Camenda, an emergency medicine professor at Yale, and Dr Susan Walley, chair of the American Academy of Pediatrics Section on Tobacco Control, advise parents on the resources are available to help a child who is vaping quit.

They tell parents to encourage their children speak to a pediatrician in a ‘safe space’.

‘One of the most important things is to ask your child to be open and honest. To be non-judgmental – which as a parent, I know sometimes can be hard,’ Dr Walley said.

In the second video, titled: ‘How to Identify Signs of Youth Vaping and Nicotine Addiction’, the pair warn that vaping can easily be hidden from parents, as it does not carry many tell-tale signs smoking cigarettes does.

‘Vaping is not something that you can easily, at the time, tell that someone is doing,’ Walley said.

She warns that a child who is secretive, aggressive and angry all the time could be suffering from nicotine cravings or withdrawals.

Performing poorly in school could also be a sign of vape use, the experts say.

Teens that vape may also regularly wheeze, get tired more easily when physically active or suffer from a new and continious dry cough.

The video also tells parents the shapes that vapes may come in, even warning parents to be suspicious of a teen carrying around a USB-shaped device – the same shape as popular Juul devices that many teens use.

While the FDA’s videos seem bizarre, teen nicotine use in America has reached an epidemic state, some experts warn.

In October, the CDC revealed that teen vaping went up in 2022 for the first time since 2019 – with 2.55million teens saying they used the device in the past 30 days.

Officials have blamed the fruity, minty and candy-like flavors of vapes for attracting younger users to the devices.

As a result, the FDA has cracked down on flavored nicotine products.

The agency now requires each firm who hopes to sell them in America to specifically apply to do so – while also having a written plan as to how they will make sure their product is not marketed to young users.

Under this new policy, the popular vape brand Juul – which has been blamed for ushering in a new era of nicotine use – may soon be removed from US shelves.

The Washington DC-based firm has appealed the decision, and is allowed to continue selling flavored products while its application is reviewed.