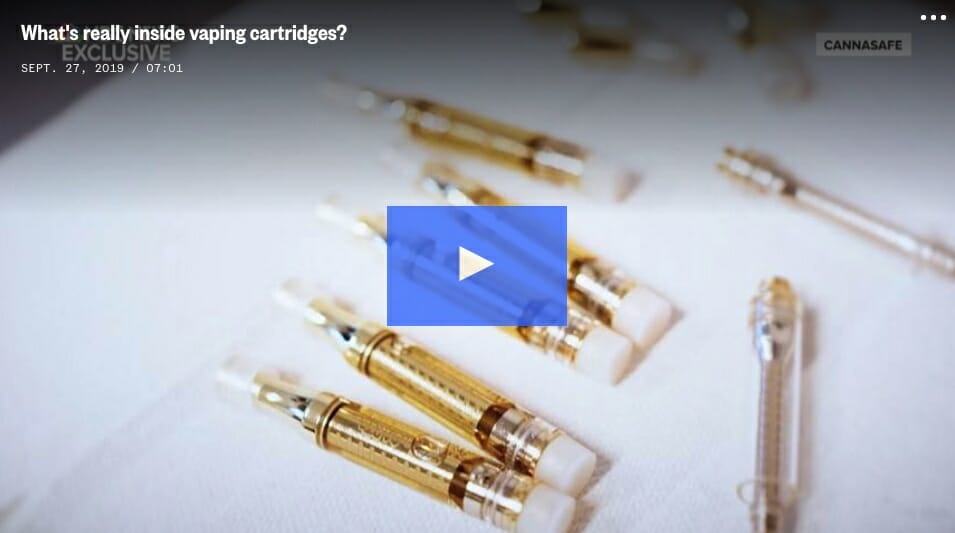 Fabian Castillo was suffering from crippling anxiety when his uncle handed him a marijuana vape pen one day last December.

“It will help calm you down,” Castillo said his uncle told him.

Over the next several months, the vape worked as advertised. Castillo, who had just graduated high school in southern California, found himself more mellow and more productive.

He had no idea at the time that he was using, what he now believes, was a bootleg vape pen filled with a toxic mix of chemicals.

But on Aug. 2, Castillo’s breathing grew labored. His mother brought him to the emergency room where, she says, an X-ray revealed severe damage to his lungs.

“I couldn’t breathe. I couldn’t talk. I literally couldn’t even move my hands,” Castillo, 19, said.

He spent the next nine days in a medically induced coma. Eight weeks later, he still struggles to breathe deeply.

The soaring popularity of vaping products — both legal and knock-offs — is fueling a public health crisis that has vexed the medical community.

Some 12 people have died from mysterious lung illnesses linked to vape pens, and 805 others have been hospitalized in 46 states, according to federal health officials.

“We are dealing with a new epidemic,” said Dr. Melodi Pirzada, a pediatric pulmonologist at NYU Winthrop Hospital in Mineola, New York, on Long Island.

The Centers for Disease Control and Prevention says most of the patients reported using vapes containing THC, the psychoactive ingredient in marijuana. Some state health officials have indicated that Vitamin E acetate, a solvent used to “cut” cannabis for use in vape pens, may be responsible for the outbreak.

But no single substance or product has yet been linked to all of the cases of vaping-related lung disease, the CDC says, leaving the medical community grappling with an exploding health crisis with an unknown cause.

At the same time, the FDA is struggling to police what has rapidly grown into a billion dollar industry with a booming black market, experts say.

The result: Americans have access to an astonishing assortment of THC vape pens without having any way of knowing what’s actually in them.

Seeking answers, NBC News commissioned one of the nation’s leading cannabis testing facilities to test a sampling of THC cartridges — 18 in all — obtained from legal dispensaries and unlicensed dealers.

The findings were deeply troubling.

Of the three purchased from legal dispensaries in California, the CannaSafe testing company found no heavy metals, pesticides or residual solvents like Vitamin E.

But 13 out of the other 15 samples from black market THC cartridges were found to contain Vitamin E.

CannaSafe also tested 10 of the unregulated cartridges for pesticides. All 10 tested positive.

The products all contained myclobutanil, a fungicide that can transform into hydrogen cyanide when burned.

“You certainly don’t want to be smoking cyanide,” said Antonio Frazier, the vice president of operations at CannaSafe. “I don’t think anyone would buy a cart that was labeled hydrogen cyanide on it.”

Pirzada described the existence of myclobutanil as “very disturbing,” adding that “it’s going to cause a very toxic effect on the lungs.”

Vaping bans are supposed to help. But could they become a...

Curate RegWatch
With multiple cities and states cracking down on vaping in recent weeks, spurred by a wave of mysterious illnesses and deaths,...

How smoking, vaping and drug use might increase risks from Covid-19