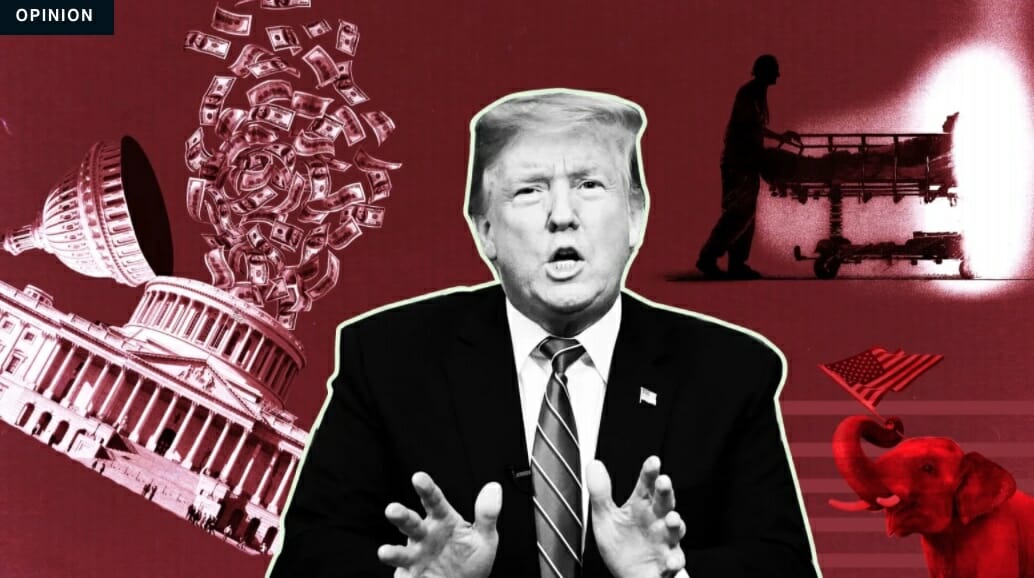 We’ve skipped over any nuanced discussion of economic considerations, straight to the part where Republicans rationalize letting a million or so people die to fix the economy.

In the last 24 hours, it has become clear that, despite warnings from experts like Dr. Anthony Fauci, Donald Trump is willing to sacrifice lives to try and save the economy and his chances for re-election.

In other words, we take inherent risks all the time. Why should a global pandemic be any different?

Johnson went on to add that “getting coronavirus is not a death sentence except for maybe no more than 3.4 percent of our population, (and) I think probably far less.”

When I signed up to be a columnist, I was told there’d be no math. Still, I’m pretty sure Johnson just said he was comfortable with millions of Americans dying of coronavirus—so long as it doesn’t disrupt economic activity.

Trump echoed this ends-justify-the-means logic Monday night and the ghoulish and utilitarian worldview that defines one death as a tragedy, 100,000 as a statistic.

This logic is spreading among Republicans. Consider the comments Texas Lt. Gov. Dan Patrick made Monday night on Fox News: “No one reached out to me and said ‘As a senior citizen, are you willing to take a chance on your survival in exchange for keeping the America that all America loves for your children and grandchildren?’ And if that’s the exchange, I’m all in.”

He went on to add, “I feel like as the president said, the mortality rate is so low, do we have to shut down the whole country for this? I think we can get back to work.”

I’m old enough to remember when conservatives worried that Obamacare rationing would lead to “death panels,” whereby older patients would allegedly be deemed too sick and expensive to help. After all, why throw good money after bad? A few short years later, and it is Republicans who are making a shockingly similar rationalization.

Patrick might be willing to be collateral damage, but I’m not sure everyone over the age of 70 will be so eager to sacrifice their lives on the altar of the stock market—nor am I sure their loved ones would approve of a government willing to sacrifice the lives of our most weak and vulnerable for (I suppose) the greater good of the fatherland.

These are, after all, our moms and dads, aunts and uncles, friends, and grandparents he’s talking about. But I guess you’ve got to break a few eggs to make an omelet. Maybe the old and the weak should make room so that the young and virile can thrive?

This is a weird turn of events for the party of life.

Look, I get the need for economic activity, and it’s fair to suggest that economic considerations (which, let’s be honest, can and do impact our health), should be part of the discussion.

Unfortunately, we have skipped over that nuanced discussion and gone straight to Republicans rationalizing the idea that we can just wipe out a million or so people to fix the economy.

There has long been a tension between capitalism and cultural conservatism. At its worst, fiscal conservatives are accused of practicing a sort of social Darwinism that encourages a “survival of the fittest” worldview. And at their best, social conservatives have advocated the dignity of human life. These things are sometimes at odds. But rarely have these “cultural contradictions of capitalism” been more clearly at odds than this debate.

And guess which side is going to win?

This is a man who responded to a pandemic by thinking, “How can I be on TV more?” It’s truly depraved.

If human life and GDP become mutually exclusive for a pandemic-stricken America, which one do you think he’s going to choose? I think we already know the answer to that one.