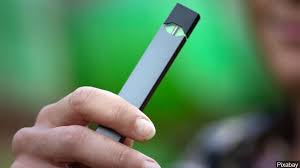 JUUL and similar pod-based e-cigarettes have been popular with teenagers and young adults since they came on the market in 2015, but little has been known about their health effects.

A new systematic review led by researchers from Harvard T.H. Chan School of Public Health found that while the products may contain lower levels of harmful ingredients than conventional cigarettes, there is no evidence that even these lower levels are safe for youth. The study also found that the devices’ efficient delivery of nicotine fosters greater dependence than other types of e-cigarettes.

This is the first paper to synthesize research findings on pod-based e-cigarettes, said first author Stella Lee, formerly a National Cancer Institute Cancer Prevention postdoctoral fellow in the Department of Social and Behavioral Sciences and currently an assistant professor at Konkuk University in South Korea. The study will be published online June 1, 2020 in JAMA Pediatrics.

Pod-based e-cigarettes are sleekly designed and easy to conceal. Users pop in replaceable nicotine cartridges that come in appealing flavors like mango and mint. JUUL has dominated retail sales, although other pod-based products are now on the market, including Suorin, Bo, Phix, and Vuse Alto. Recent data have shown that e-cigarette use in adolescents has increased substantially since the introduction of pod-based e-cigarettes, prompting the U.S. Surgeon General to declare youth vaping an epidemic.

For this study, the researchers reviewed recent peer-reviewed scientific literature on pod-based e-cigarettes. They identified 35 English-language articles that presented primary data on pod-based e-cigarettes from June 2015 to June 2019. Studies looked at product design and biological effects, marketing and social media messaging, and population use and perception.

Curate RegWatch
Since the introduction of electronic cigarettes, or e-cigarettes, to the United States in 2006, intense debate has surrounded the marketing, regulation...

A plus from the pandemic: fewer kids using e-cigarettes