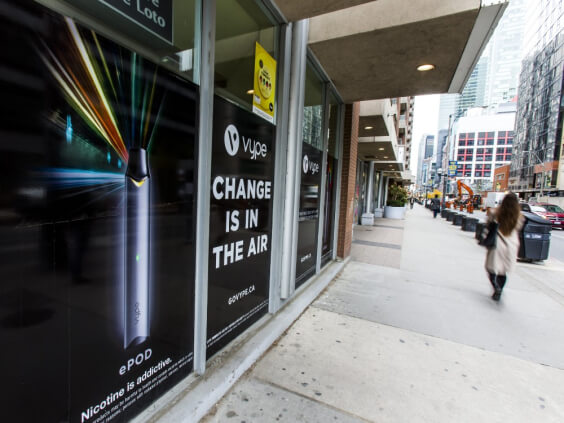 Health Canada has announced plans to crack down on advertising vaping products that target youths following an alarming rise in their use.

The Department of Health has ordered storekeepers nationwide to remove all vaping advertising “seen by young persons” under threat of $50,000 fines or six months in jail.

The crackdown comes after multiple appeals from the Canadian Medical Association (CMA) to regulate vaping products. Dr. Sandy Buchman, the president of the CMA, said the new regulations were a step in the right direction.

“We see the new regulations as progress,” said Buchman. “But it’s going to be really important to keep the momentum going. There’s still work to be done.”

Health Canada reported Canadians aged 15 to 19 years old and 20 to 24 years old have the highest rates of trying vaping. Twenty per cent of students from Grade 7 to 12 reported using a vaping product in the past 30 days.

“The frequency of use is high, particularly in the upper grades,” wrote the health department. “The prevalence of daily or almost daily e-cigarette use was thirteen percent among students in grades ten to twelve.”

Regulations require that all convenience stores, gas stations and other retailers must remove vaping displays, ban “any visual, sound or other effects” to promote e-cigarettes, and limit signage to plain black and white lettering with prominent health warnings, according to the Blacklock’s Reporter news site that first reported the ban.

“A vaping product must not be displayed at the point of sale in a manner that allows it to be seen by young persons,” Blacklock’s reported the department as saying.The aim, said Health Canada, is “to protect youth from being exposed to advertisements that can induce them to try vaping.”The new regulations will come into effect on August 7. The point-of-sale prohibition will begin on Sept. 6.

In a statement Health Canada said it was considering more regulations to reduce nicotine content, further restrict flavours, and require the vaping industry to provide information about their vaping products.

Allan Rewak, the executive director of the Vaping Industry Trade Association, said he was happy the measures would be taking effect.